You want a nail biter? You’re asking for it…

Last Friday my soccer team played a big region rival. This was our most challenging and most important game yet, the biggest threat to our lossless record. We had a facebook event titled “BLACKOUT” (team color) with hundreds of guests. The girls game, which was right before the boys’, ended with 4-0 win for my school. The announcer called out starting lineups, we stood for the national anthem, we huddled twice for motivational speeches, and we took the field.

We scored about ten minutes in off a textbook cross on the ground to a player right at the top of the box who drove the ball inside-of-the-foot into the far corner. Then our rival knocked one in a few minutes later off a corner. The score stayed 1-1 through the half. A few minutes into the second half, the opposing team scored again during a scrap in our box. The score remained 2-1 until the 65 minute mark. We got a PK and scored; easy. Not more than a minute later an attacking player shot past our keeper. The ball smacked off the far post and into the leg of my center back, and then into the goal. The score was 3-2. We were losing. Fast forward past ten minutes of frustrating offensive moves and missed shots. We took a corner, the ball flew to the middle of the box, our center mid jumped five feet up in the air (I swear the whole thing happened in slow motion) and raised his leg up another couple feet, and pushed the ball into the back of the net. Regular time ended 3-3, but the game was far from over. 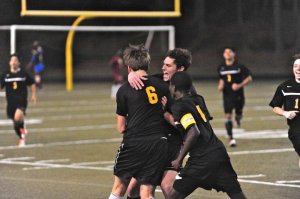 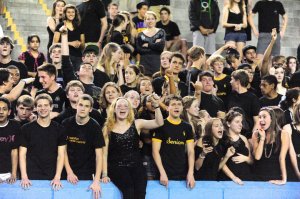 The game continued with another ten minutes of the most competitive, hard balled, intense soccer I’ve ever played. Despite my team controlling both halves of overtime, the score remained 3-3.

We moved to penalty kicks.

#1: Our center back knocked the ball into the left side netting. Our keeper knocked away our rival’s first PK. Off to a good start.

#2: Stopper took a confident strike into the back of the net. Their keeper dove the wrong way. Their next player scored.

#3: We scored. Our keeper pushed away another ball.

#4: My brother, who has never taken an in-game PK before, had a beautiful mishit into the upper 90 post. The other team scored.

#5: It all came down to this last PK. If our striker scored his ball, we had the win. You know my team though. He scored, we won, and everyone in their blackout gear flooded the field to congratulate their team on the biggest win of the year. Oh and our keeper’s dad (he was running the concession stand during the game) gave everyone Chic-fil-a. 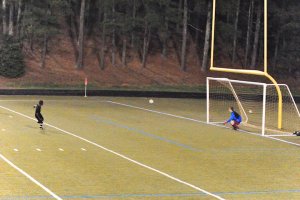 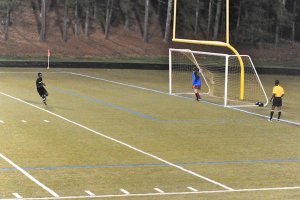 that's what it looks like to win a game in PK's

It was a good game and that means a lot coming from my mouth. Just a couple weeks earlier I had contemplated leaving the team because I wasn’t enjoying anything we were doing. But playing in a real bond-building, bond-testing, game showed me what soccer is all about. I’m finishing out the season proud of whatever we accomplish.

P.S. All of these photos are courtesy of Logan Brammer. Here’s his photography website:  www.loganbrammer.com

We are three kids from three different time zones, with one common goal. This is our voice:
View all posts by Brad,Robert,Ben →
This entry was posted in Ben. Bookmark the permalink.

3 Responses to You want a nail biter? You’re asking for it…